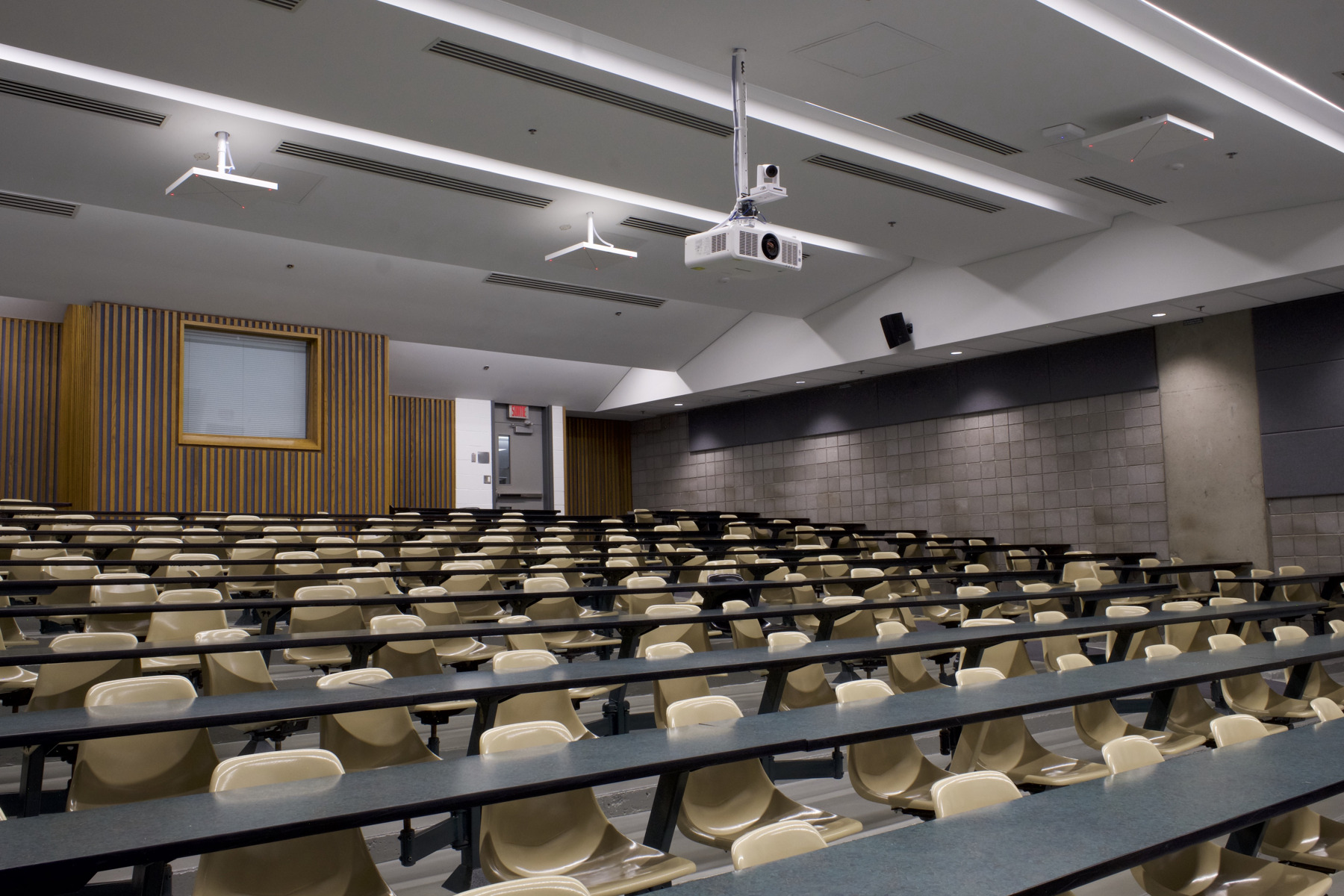 Montréal, Québec, November 1, 2022 — The University of Québec (UQAM) is known for delivering high caliber educational programs driven by cutting-edge research and innovation. Rather than depending on legacy technology for its infrastructure and communications, the University is continually exploring and implementing cutting edge solutions to foster a surperior educational environment for both students and faculty. Prior to the onset of the COVID-19 pandemic, Jean-François Duguay, AV and Multimedia Technical Specialist, began implementing a transition to an AV over IP system in the School of Management, ESG UQAM, which included over two-hundred Sennheiser Team Connect Ceiling 2 (TCC2) ceiling microphones.

Maintaining Integrity for Remote Learners
​The overall goal of the AV system was to maintain the integrity and dependability of every device on the network. Hybrid and remote learning were major components in the design program, and ensuring high-quality audio was an essential outcome for both teacher and students, says Duguay: “If you have any interruptions in the voice-feed, especially for remote students who are learning in different countries, it will disrupt the classroom."

He says that the overall solution — which ultimately included Sennheiser's TCC2 — had to be both nimble and reliable. "The goal is to connect the students via broadcast across either Zoom or Teams, which was best achieved by AV over IP because all the devices are connected and can be monitored in one center. If there is a problem it can easily be identified and addressed.” Transitioning over to an AV over IP system required a collaborative effort between both the AV and IT departments. Duguay reports that both groups had to be aligned on equipment choice, since achieving end-to-end AV quality was of the utmost importance. ​

François Wermenlinger, Eastern Canada Sales Manager of Sennheiser, comments, “They required great microphones, PTZ cameras as well as other devices to grab the teachers screen over the platform.” The TCC2 was the perfect solution especially considering the University faculty was comfortable with the Sennheiser SpeechLine Digital Wireless microphone system that was integrated across the entire campus in 2020. After Jean-François did his research and tested the product with the manufacturer he decided to move forward with the TCC2. “The TCC2 is plug-in-play, it’s simple," Duguay says. "Even the control software is easy to use with Control Cockpit."

Capturing Sound with 25-foot High Ceilings
​The integration itself was particularly challenging given the amphitheater’s 25' high ceiling as well as the frequent rumble from the subway stop that ran directly beneath the building. The TCC2’s also had to circumvent pre-existing elements in the facility, including a projector, roll down screen, camera, sprinklers, and air patterns within the building.

Wermenlinger was an active participant in exploring design options — including strategic placement of each TCC2. “At first, I was not sure it was going to work, but we looked at the design drawings and placed five TCC2’s around the amphitheater," states Wermenlinger. "We climbed up on ladders and taped the ceiling in mock positions.” Since the facility was undergoing simultaneous renovations, Jean François and his team were able to look at the wiring and infrastructure usually concealed by the ceiling further assisting with the install. Montréal-based AV-supplier, SoloTech, provided the TCC2 ceiling mics and since the installation each unit has been functioning perfectly.

Ultimately, Duguay and his team achieved their goal. Each TCC2 device delivers a strong signal over the network. The patented Beamforming technology is able to capture the voices of both students and faculty with superior intelligibility — without the noise. “The clarity is perfect, especially with a lot of reverberation in the big amphitheater," Duguay concludes. "The recordings are clean, and the students sound as if they are speaking into a close mic. "It is an avant-garde system that is future-proofed with flexibility to be improved upon over time."

The new TCC2 system has been up and running for two full semesters, and the amphitheater in particular is getting heavy use. It hosts roughly 300 students from 9:00 a.m. until 9:00 p.m., five days a week as well as additional weekend events. The ability for the AV team to run diagnostics and monitor the devices remotely greatly improves the continuity.