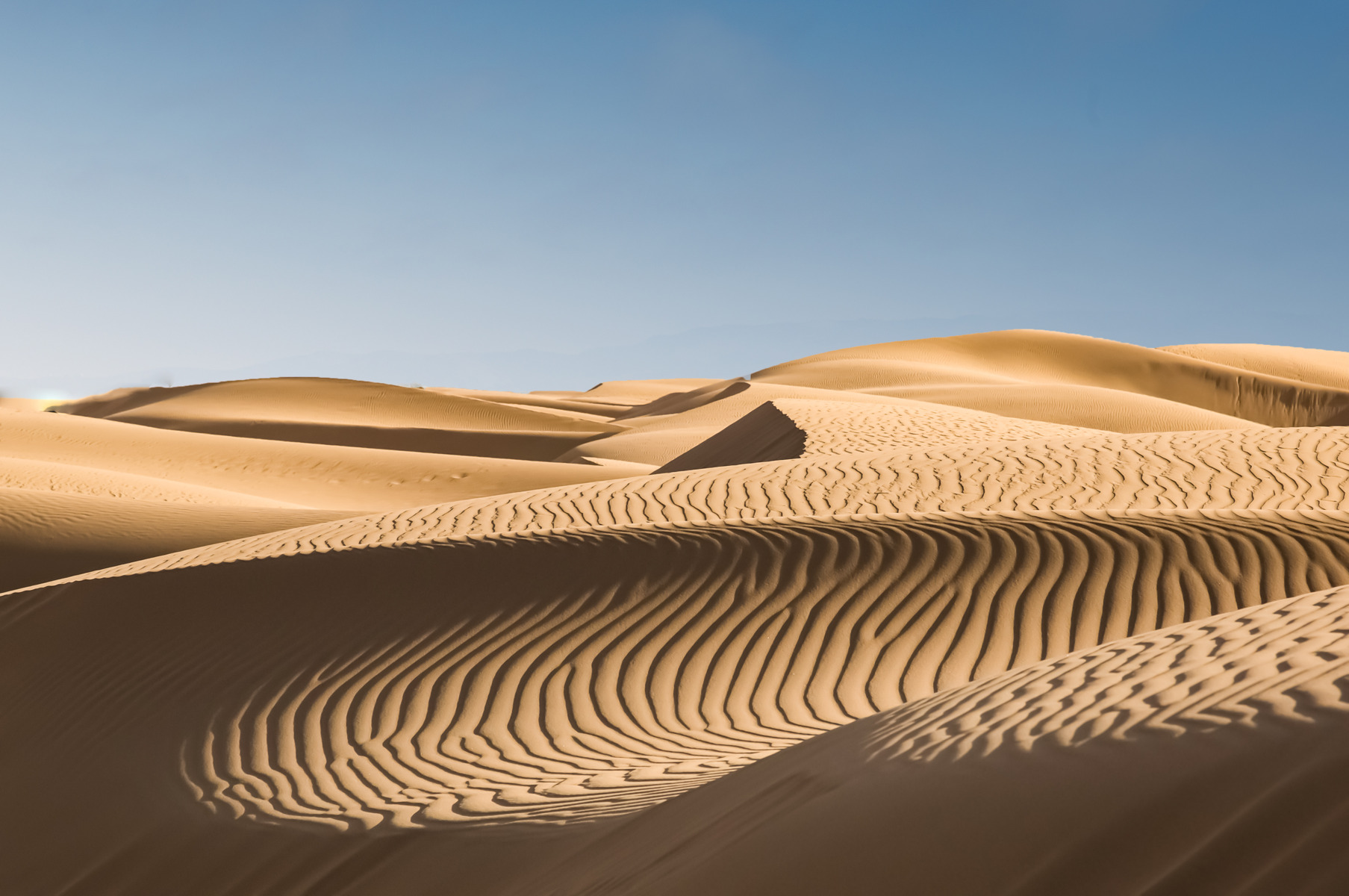 Silence. A deafening silence. There is surely no other place in the world where the lack of sound is as all-encompassing as the Sahara desert. Locals call it “the sea without water,” while explorers call it an “ocean of silence.” With 9 million square kilometers of sand and stone, it is the largest dry desert on our planet and comparable in size to the United States of America.

Deserts have always fascinated people. This is not least due to the fact that their unpredictability—the heat, the storms, the avalanches—make living there completely impossible. Anyone who tries to set up camp in the desert will not be able to withstand the elements for long. And anyone who undertakes long expeditions must be well prepared and, above all, flexible. Travelers have to keep moving to avoid being blown away by the wind. But because the desert is constantly regenerating, it always appears untouched and unexplored—as if nobody has been there before. It is the image of vastness and emptiness that draws visitors to the desert. It is the way that desert phenomena like the Fata Morgana, the illusion of being close to a source of water, plays with our minds. It seems as if the desert is the only place on earth that we have not yet been able to conquer—and never will.

Demons of the desert. The phenomenon of
​the singing sand dunes.

Yet, the desert is not always silent. Since the 13th century, records have revealed a unique sound in the desert. A hum or perhaps a groan. Some even say it sounds like an airplane. Yet there is nothing in the sky. And the noise cannot be heard in the dunes either. So who is singing in the sand? The noise cannot simply be dismissed as an auditory mirage, it is much too loud for that. In recent years, sounds measuring 100 decibels have even been recorded. So are there ghosts in the desert? Demons in the dunes? Naturally, that’s how people came to explain the phenomenon—telling passionate and dramatic tales of these strange events. The legends are much the same, and pertain not only to the Sahara, but also to the Gobi and Namib deserts. Even in smaller regions, the phenomenon still occurs today.

The secret to this auditory mystery lies in the avalanches. A discovery which was only made recently. It was just a few years ago when the Laboratory for Physical Statistics in Paris presented their research results—and even managed to “recreate” the sound. But in order to understand the sound, they first had to simulate how a desert avalanche is actually structured. It consists of up to 500 layers with a thickness of approximately ten centimeters. These layers slide down the dune one after the other, creating air cushions. The weight of the avalanche then eventually pushes the pent-up air outwards, causing vibrations. If we imagine these vibrations magnified 500 times, it is no wonder that the sound becomes almost demonic. Almost threatening. A gruesome song that echoes through the dunes.

When music breaks the silence.

EWhen visitors were invited to the Berber camp in the Erg Chegaga desert in southern Morocco to enjoy bread baked in hot ashes around the campfire, the music they heard told stories of these phenomena. The traditional Berber music is an original part of Moroccan culture, very rhythmic, and accompanied by drumming, clapping and singing. The Berber people use this music to express their feelings about the day’s events, with primitive humor. When the sound of their drums rises into the night air, there is no echo, no reverberation, no vibration—their sound is completely pure, in harmony with the silent, vast, unexplored desert.

The future of our planet is hidden in the eternal sand.

Although scientists have known for years that the desert was not silent, researchers have recently made another pioneering discovery. By using artificial intelligence to study the ecosystem of the western Sahara and Sahel, it is evident that there are far more trees here than we ever imagined. The desert is therefore more fertile than we have believed for centuries. Perhaps this idea of vastness and emptiness, the absence of a plant system and soil culture, may have all been a huge misunderstanding. In times when we are facing the threat of climate change, the desert suddenly becomes a crucial prospect for our future. We still know far too little about this part of our planet, which we view with apprehension and which we have not yet really dared to explore.

Now it is time to listen, learn and discover the hidden secrets of the desert.
​