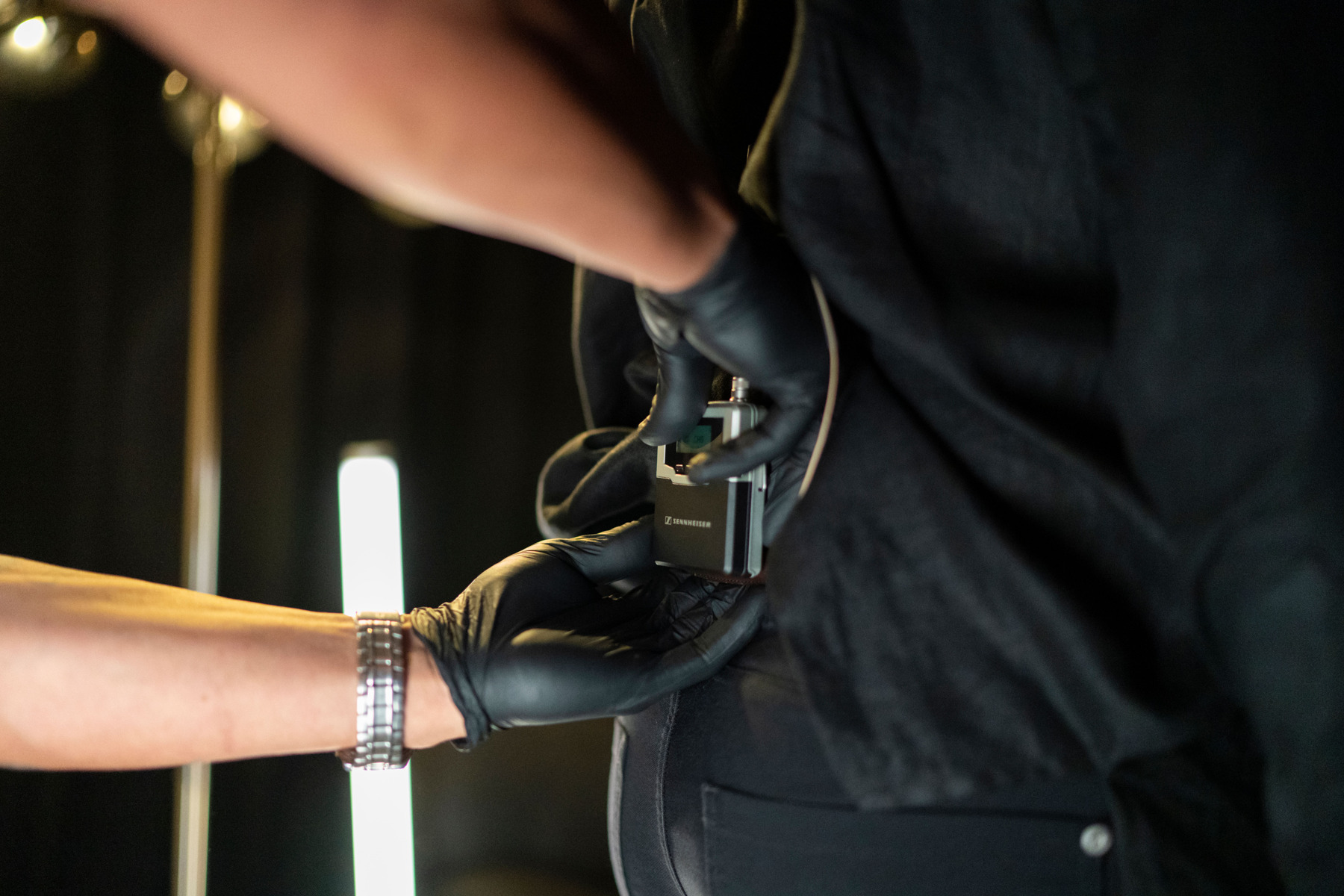 Monterey, CA – Audio manufacturer Sennheiser has partnered with TED, the global organization devoted to Ideas Worth Spreading, to ensure that the audio technology behind TED Talks is as cutting edge as the content that the brand is known to deliver. Sennheiser has built a one-of-a-kind headset microphone for TED speakers that reliably delivers top notch sound, while matching the sleek and minimalist aesthetic of the brand. The new headsets debuted alongside the Sennheiser Digital 9000 Wireless Microphone System at TEDMonterey 2021 in August, the first in-person TED conference since 2019 featuring such speakers as Adam Grant and Lizzo.

Sennheiser was first approached by TED in 2018 as they were looking for a better solution than the headset microphones they were using at the time. “We ran into many issues from both an audio and aesthetic perspective. The previous microphones were clunky and obtrusive,” says Mina Sabet, Director of Production and Video Operations at TED. Mina was determined to design and build the first ever custom microphone for TED that would solve these challenges, and after much research, she set her sights on Sennheiser as the ideal partner. “I wanted to work with Sennheiser to create the perfect microphone for us that is beautiful, modern and sounds great, without taking away from the performance visually – and I wouldn’t take no for an answer because I knew they were the best in the business.” Mina collaborated with the team at Sennheiser, spearheaded by Volker Schmitt, Technical Application Engineering Manager for Pro Audio, to bring her vision to life.

In their design collaboration, which involved various prototypes, Sennheiser achieved what TED was looking for in a headset microphone. The final design took elements from a few of Sennheiser’s top products, melding them together in a stylishly streamlined package. The short boom arm and tiny microphone leveraged the transducer from the MKE 1 to give it the same top-of-the-line clarity and excellent frequency response found in musical and broadcast applications. The thin neckband allowed comfort for long wears, and the silver color gave it a modern yet subtle edge. While the design is unique to TED, it takes inspiration from Sennheiser’s popular headset microphones that can be found all over Broadway productions and broadcast news studios.

“The project with TED was outstanding and refreshing because Mina came in with a clear vision for the microphone. During the development phase, it was fantastic to have a partner so involved in the creative process,” says Volker Schmitt. “Both Sennheiser and TED are all about pushing boundaries and delivering the best possible performance, so there was a lot of synergy in this partnership. We both maintain equally high standards for ourselves, so I am very proud of what we created together.”

“I feel a real affinity with Sennheiser because they allowed me to have such a big part in the design process. Volker really listened to what I was looking for, and we got everything we wanted out of the partnership,” says Mina.

While the microphones’ debut was delayed due to the pandemic, they finally graced the TED stage for TEDMonterey 2021 in early August. The four-day conference featured 63 performers and speakers, with hundreds of attendees joining in-person and remotely. According to Mina, “The energy at the conference was off the charts, everyone was so excited, and the content was fantastic. From a production standpoint, it was extremely smooth,” she continues, “the Sennheiser mics sounded crisp, sharp and looked perfect on all of the speakers. A few times, I even thought that the tech teams had forgotten to mic up the presenters because the headsets are so sleek and low-impact!”

TED used the Digital 9000 Wireless System to bring the custom headsets to life and ensure fantastic and consistent sound throughout the sessions. The robust system featured 4 channels of wireless, 15 belt packs and was paired to all 50 headsets and 50 handheld microphones used throughout the event. According to Volker, “the Digital 9000 was an advantageous choice for TED thanks to its analog and digital outputs for audio, its Wireless Systems Manager software that enables the AV team to access live performance data, as well as its equidistant channel spacing allowing for easy set-up and frequency coordination without calculations.” In Mina’s words, “we’ve used the Digital 9000 before, and as usual the wireless system was wonderful. It is so reliable, easy to use and sounds great.”

After a successful first in-person event with TEDMonterey 2021, the organization will continue the momentum with important flagship conferences in the coming months. The TED calendar for the remainder of the year will feature “The Countdown Summit” on climate change in Edinburgh, Scotland from October 12-15, and “TEDWomen: What Now?” taking place in Palm Springs, California from December 1-3. “Those Sennheiser mics will go with us everywhere,” says Mina.
​
​
​The high resolution images accompanying this press release can be downloaded here.

About TED
​TED is a nonprofit organization devoted to Ideas Worth Spreading, often in the form of short talks delivered by leading thinkers and doers. Many of these talks are given at TED conferences, intimate TED Salons and thousands of independently organized TEDx events around the world. Videos of these talks are made available, free, on TED.com and other platforms. Audio versions of TED Talks are published to TED Talks Daily, available on all podcast platforms.

TED's open and free initiatives for spreading ideas include TED.com, where new TED Talk videos are posted daily; TEDx, which licenses thousands of individuals and groups to host local, self-organized TED-style events around the world; the TED Fellows program, which selects innovators from around the globe to amplify the impact of their remarkable projects and activities; The Audacious Project, which surfaces and funds critical ideas that have the potential to impact millions of lives; TED Translators, which crowdsources the subtitling of TED Talks so that big ideas can spread across languages and borders; and the educational initiative TED-Ed. TED also offers [email protected], a program that reimagines TED Talks for workplace learning. TED also has a growing library of original podcasts, including The TED Interview with Chris Anderson, WorkLife with Adam Grant, Far Flung with Saleem Reshamwala and How to Be a Better Human.
​
​Follow TED on Twitter, Facebook, Instagram and on LinkedIn.

About Sennheiser
​Shaping the future of audio and creating unique sound experiences for customers – this aim unites Sennheiser employees and partners worldwide. The independent family company, which is managed in the third generation by Dr. Andreas Sennheiser and Daniel Sennheiser, is today one of the world’s leading manufacturers of headphones, loudspeakers, microphones and wireless transmission systems. In 2020, the Sennheiser Group generated turnover totaling €573.5 million. www.sennheiser.com