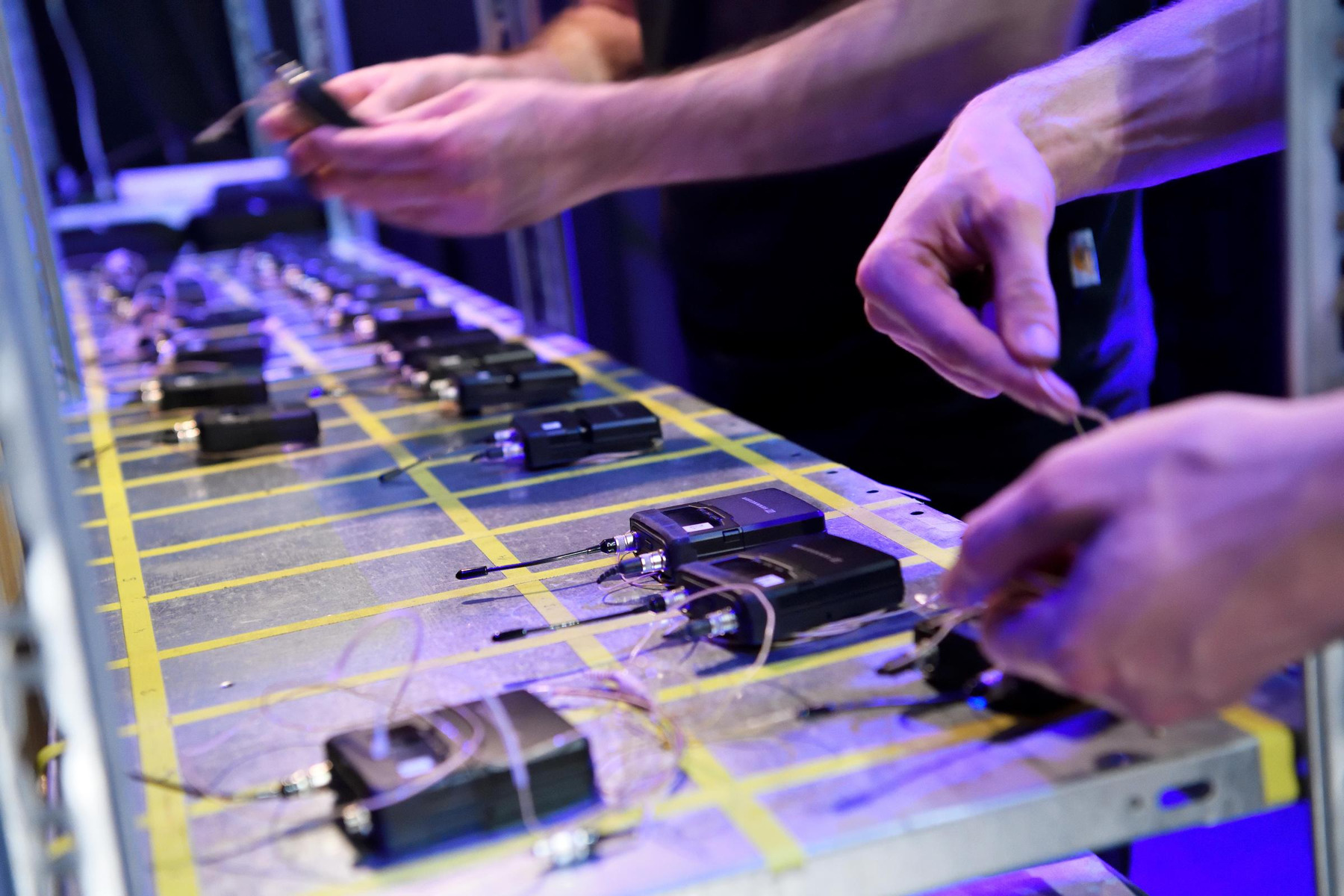 Miami, FL, February 17, 2020 – Broadcast on Fox to an international televised audience of more than 100 million, this year’s Super Bowl Halftime Show was held at Hard Rock Stadium in Miami Gardens, FL. While the performance itself only lasted approximately 14 minutes, the preparation was immense and technical execution flawless. According to numbers released by Fox network, this year’s Halftime Show reached more viewers than the game itself – with a total of 104.1 million tuning in from around the world.

Sennheiser’s Digital 6000 wireless system was the microphone of choice for headline performer Shakira as well as her special guest, Bad Bunny, as the two Latin GRAMMY Award® winning artists sang against a perfect Miami cultural backdrop. ATK Audiotek handled the audio design for the pre-game festivities, referee microphones and the Halftime Show for the 23rd Super Bowl in a row.

All hands on deck

Just prior to halftime, there was no shortage of excitement in the game as the Kansas City Chiefs staged a dramatic comeback, tying the game at 10-10. Once the clock ran out after the second quarter, the Halftime Show crew had approximately six minutes to dispatch and assemble the entire stage, located nearby the field’s 30-yard line. Antenna systems for the wireless microphones were set up in advance on either sideline prior to the game, along the stadium wall behind the team benches.

“It is not a traditional concert environment where you can put antennas out on the side of the stage where they are relatively close to the performer,” observes Gary Trenda, Lead RF Technician for Orlando, FL-based Professional Wireless Systems (PWS). “We deployed antennas on the sidelines and aimed them at where the stage was going to be; then we used an RF-over-fiber system to connect back to the receivers, which were in a rack room under the stands.”

For the Halftime Show performance, wireless receivers are usually placed at a further distance than at a typical rock concert, since the Halftime Show stage is temporary and must be disassembled after just 14 minutes. As such, the wireless must perform flawlessly – despite not having the advantage of close proximity to the stage. “In a show like this, reliability is critical,” says Trenda. “We’ve got to pick up the signal at a longer distance, and it really needs to be rock solid.”

Sennheiser delivers for millions of fans

For Shakira and Bad Bunny, the RF team deployed four channels of Sennheiser Digital 6000 wireless – three separate mic channels for Shakira, and one for Bad Bunny. Shakira sang several songs through a gold sparkled SKM 6000 handheld transmitter and MD 9235 dynamic cardioid capsule, before being joined onstage by Bad Bunny, who also sang through an SKM 6000 – colored in neon yellow, coupled with a distinctive red MD 9235 capsule.

“This is my second Super Bowl using Sennheiser digital systems, and our experience has been that even in a crowded RF environment, it is a very reliable microphone system,” says Trenda. As one would expect, the RF environment at the Super Bowl can be challenging: “In the stadium area alone, there are probably 500 frequencies of mics and IEM-type systems – so we are really looking to zero in on the mics we care about and filter out anything else. This is why we applied 6 MHz cavity tuned filters in front of the Sennheiser receivers. The filters are tuned specifically to the frequencies we were using for that pair of microphones.”

With 23 Super Bowl Halftime Shows under their belt, preparation is key for ATK Audiotek. Among many other activities that take place, a site survey is conducted around September in which a crew is dispatched to examine the local RF environment. RF coordination is done by the NFL Event Frequency Coordinators (EFCs). Lead EFC Loren Sherman assigns frequencies for the Halftime Show so every dimension of the performances can be carried out. The crew loads in a week and a half prior to game day, and then crews are allocated time for on-field rehearsals. This year, ATK and PWS ran through full rehearsals of the Halftime Show three times – each time carefully scanning the RF environment to ensure smooth operation.

Support when it counts

On a scale of programming such as the Super Bowl, RF crews inevitably face last minute challenges – in this case, the performers’ preference to use aesthetically stylized microphones had to be reconciled with transmitters aligned to the right frequencies. Trenda explains: “We had a blinged out black microphone, one that was painted a metallic red, and another that was blinged out gold — but the transmitters were in a frequency range that we were not able to use at the Super Bowl. So, we called Sennheiser and they were able to send handheld transmitters in a range that was exactly what we needed for the show. We then swapped out the blinged out shells onto entirely different transmitters. The support from Sennheiser was fast and dependable.”

Brett Valasek, General Manager of ATK Audiotek, appreciates the quality, reliability and service support Sennheiser provides, adding: “We’ve done many shows with the Sennheiser Digital 6000, and it is a product we trust,” he says. “We were very happy that both Shakira and Bad Bunny were using the Digital 6000s – we are very pleased with its RF strength and audio clarity. With respect to our transmitter frequency challenges, we are very pleased that Sennheiser was able to support us through the entire process. We truly value our relationship with Sennheiser.”

About Sennheiser
Shaping the future of audio and creating unique sound experiences for customers – this aim unites Sennheiser employees and partners worldwide. Founded in 1945, Sennheiser is one of the world’s leading manufacturers of headphones, loudspeakers, microphones and wireless transmission systems. Since 2013, Sennheiser has been managed by Daniel Sennheiser and Dr. Andreas Sennheiser, the third generation of the family to run the company. In 2018, the Sennheiser Group generated turnover totaling €710.7 million. www.sennheiser.com

Shaping the future of audio and creating unique sound experiences for customers – this aim unites Sennheiser employees and partners worldwide. Founded in 1945, Sennheiser is one of the world’s leading manufacturers of headphones, loudspeakers, microphones and wireless transmission systems. Since 2013, Sennheiser has been managed by Daniel Sennheiser and Dr. Andreas Sennheiser, the third generation of the family to run the company. In 2020, the Sennheiser Group generated turnover totaling €573.5 million. www.sennheiser.com