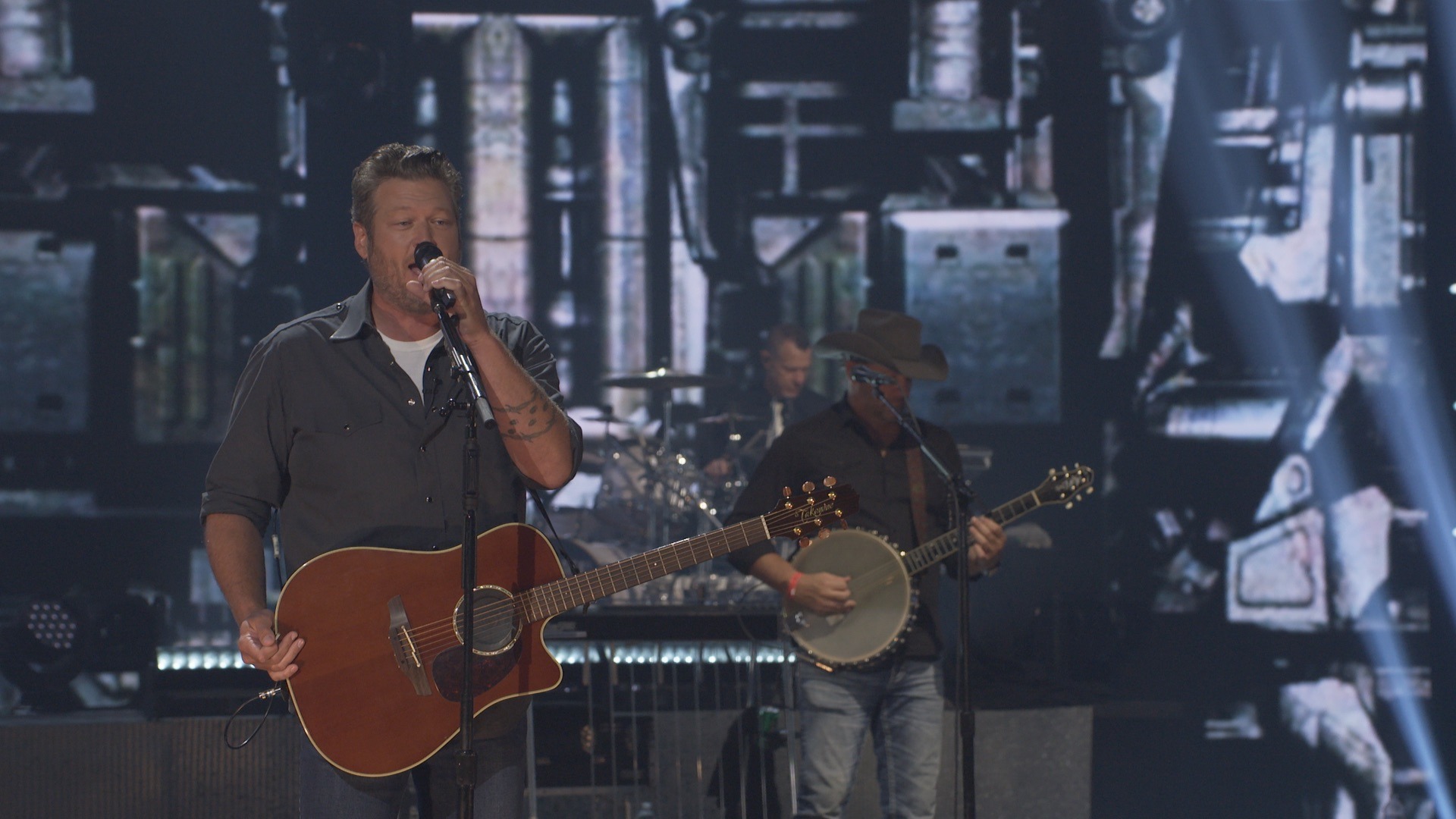 Nashville, Tennessee, July 22, 2020 – Award-winning country music artist and television personality Blake Shelton has announced an exclusive one-day-only drive-in performance screening, which will take place simultaneously at 300 participating drive-in locations throughout the country. The recently taped performance includes a full set of Blake’s best-known music performed with his six-piece touring band and also features special guest appearances by Gwen Stefani and Trace Adkins. Monitor engineer Brad Baisley and Shelton’s full touring band, including drummer Tracy Broussard, were on hand to ensure a seamless experience that captured the energy of Shelton’s live show. For the performance, they turned to their most trusted gear for audio fidelity: Sennheiser vocal and instrument microphones and Digital 6000 wireless technology.

The planned hour-and-a-half-plus show is to feature many of Shelton’s biggest hits, as well as some of Stefani’s and Adkins’s. Baisley turned to their trusted touring complement of Sennheiser microphones to stay true to their live sound. “We all knew from the beginning that we wanted this drive-in concept to feel like a real Blake Shelton concert, so it was great to have our Sennheiser mics that we use on tour,” says Baisley, who has worked with Shelton as a monitor engineer for eight years. “We recorded it at the joint PRG (Production Resource Group) and VER (Video Equipment Rental) warehouse space outside of Nashville without an audience. They set up a real pipe and drape area to create the ambience of a big venue show. It was a seven-camera shoot, and we ran the whole show down in one take.”

To translate the compelling vocal performances of Shelton and his guests, Baisley turned to the combination of the Sennheiser MMD 935 capsule and SKM 6000 handheld transmitter. “Whenever we do a show, everybody uses Sennheiser,” Baisley says. “We had Blake, Gwen Stefani, and Trace Adkins all featured prominently in the show, and we used MMD 935 capsules on everybody. Having each performer on the same mic ensures that we’re starting from a level playing field tonally.”

For Baisley, the MMD 935 capsule has long distinguished itself with both its sound quality and external noise rejection. “We love these capsules because they have a high-fidelity sound, but they’re not as feedback prone as some other mics with that characteristic. They sit really well in a mix.” Those qualities have only been heightened since Shelton’s team adopted Sennheiser digital wireless. ‘We transitioned to the Digital 6000 three years ago,” Baisley says. “That really took the sound of the MMD 935 capsule to another level.”

In addition to superior sound quality, RF flexibility and stability has been another highlight of the Digital 6000 for Baisley. “We don’t need gear to get in the way of what we’re doing from an entertainment point of view, we need gear that works all the time, every time, and the Digital 6000 does just that,” he says. “And with today’s spectrum situation, having a digital system that can navigate even the most challenging RF environments has really been a life saver.”

The Heartbeat of Country

Crafting a contemporary country drum sound is key for Baisley and drummer Tracy Broussard. They’ve honed in on a selection of Sennheiser and Neumann microphones to give them what they need in any environment.

For kick drum, the combination of a Sennheiser e901 inside the drum and an e602 outside the drum provides the depth and flexibility Baisley desires. “I gate and compress it such that I’m only getting the click from the e901, and then I use the 602 for subs,” he says. “This gives me the option to easily dial in different sounds for everyone’s monitors based on their needs.” For Broussard, he loves how the mics handle any bass drum he chooses. “No matter what kit I put up there, the e901 and e602 sound amazing,” he says.

Broussard likes to use a medium-toned snare, with ample baffling to drop its tone further for a fatter sound when necessary. With a vintage Sennheiser e905 on snare top and an e604 on snare bottom, Baisley has access to all the tone and sensitivity he needs for Broussard’s monitor mix. “The e904 on bottom captures the attack and sizzle, while the e905 on top gives me the body of the drum.” The result is a contemporary sound that fits Shelton’s music and feels great for Broussard. “The snare drum needs to be fat for modern pop country, and those mics give you that while also making sure all the ghost notes that I do are well represented.”

Another e904 captures Broussard’s rack tom, while an e902 helps translate the deep lows of Broussard’s floor tom. “The e902 on the floor tom is pretty amazing,” Broussard says. “Of course, it’s great on a kick drum, but having a mic like that on the floor tom is something that I’ve really enjoyed.” Baisley agrees. “It gives you that real big bottom out of the floor tom, and clear attack, too,” he says.

A pair of Neumann KM 185 condenser microphones capture the sound of Broussard’s cymbals. “Cymbal definition is very important for our instrumentalists to hear in their monitor mixes,” Baisley says. “We use a pair of KM 185 mics under the cymbals because their super-cardioid polar pattern is very effective at rejecting the rest of the drums.” For Broussard, the KM 185 microphones also effectively capture the full tonal range of his carefully chosen cymbals. “They’re truly representative of what the cymbals sound like,” he says.

Cymbal definition is further enhanced by a pair of e914 microphones on hi-hat and ride respectively. “Those mics are important for bringing out the full tone of the hi-hat and ride cymbals,” says Broussard. “With my ride cymbal, I get all different tones from it depending on where I hit it. The e914 represents all of it, whether it’s the washy sound on the edges or the bell right in the middle. And it’s great to be able to ride in that extra presence from the hi-hat when needed.”

Elsewhere on-stage, Sennheiser mics are ubiquitous. “The e906 is incredibly versatile,” Baisley says. “With the 3-position roll-off, you can always find the right sound for guitar amps, and we use them on the Leslie horn as well paired with an e602 for the low-end.” For pedal steel guitar, however, Baisley turns to another classic design. “The MD 421-II is the best pedal steel guitar amp mic there is,” he says. “Pedal steel guitar has such a wide range, almost like a piano, so the full-spectrum response of a 421 works really well for it. And of course, it’s great on bass amps, too.”

With only two weeks to pull everything together, Baisley was impressed with his team’s performance. “Blake and the band had just one rehearsal together for the show after 110 days off,” he says. “But it really came together quickly once they got going. Having everyone return to all the sounds that they’re accustomed to with our Sennheiser mics definitely helped them give their best performance.” For Broussard, while the microphones help him feel connected to his performance on-stage, he also appreciates connecting with Sennheiser off-stage. “It’s been great getting to know everyone at Sennheiser, and their product support is amazing,” Broussard says.

Broussard is happy to once again share the excitement of live music with Blake Shelton fans. “As a performer, you learn to give the same show whether there’s 1 person in the room or 60,000. Working with Brad and our Sennheiser microphones helped give us the confidence and comfort to go out and play our best for the taping. And when Blake’s fans show up to the drive-in, they’re going to feel that energy.”

Shaping the future of audio and creating unique sound experiences for customers – this aim unites Sennheiser employees and partners worldwide. Founded in 1945, Sennheiser is one of the world’s leading manufacturers of headphones, loudspeakers, microphones and wireless transmission systems. Since 2013, Sennheiser has been managed by Daniel Sennheiser and Dr. Andreas Sennheiser, the third generation of the family to run the company. In 2019, the Sennheiser Group generated turnover totaling €756.7 million. www.sennheiser.com