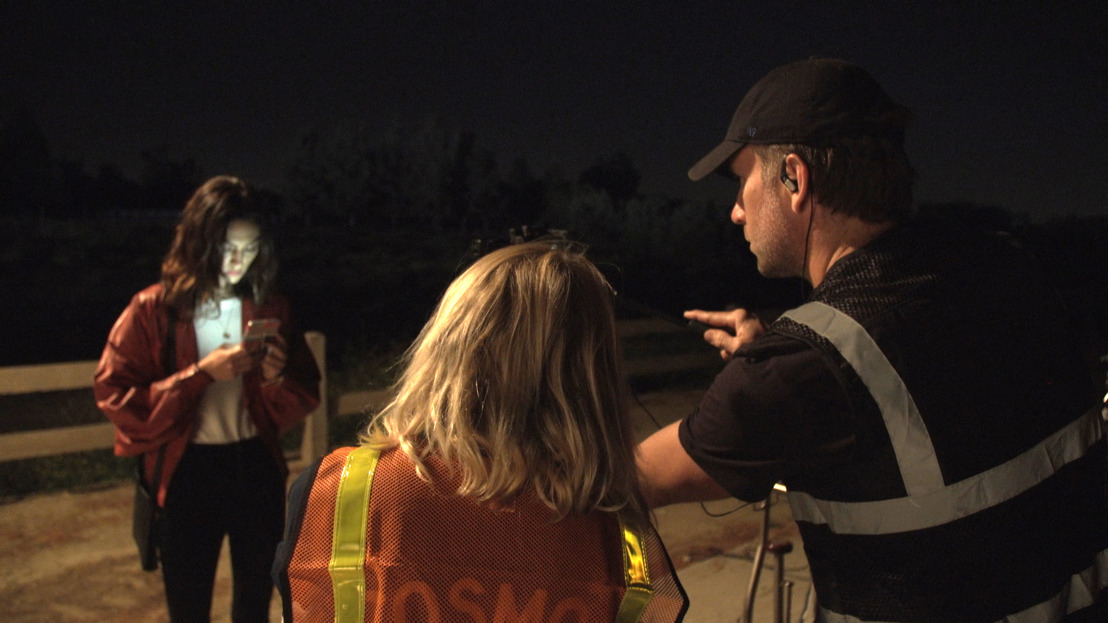 Wedemark, 22 August 2018 – The rustle of a newspaper, the sound of the bus engine far away, the steps of the stalker in the pitch-black night: The hairs on the back of every neck will stand up, thanks to the incredibly realistic 3D sound in Sennheiser’s short film FINAL STOP. Writer and director Roxanne Benjamin uses the soundscape to create a thrilling atmosphere, with stunning audio recorded using Sennheiser’s AMBEO SMART HEADSET. The result is a gripping 3D audio thriller.

The short movie FINAL STOP by Sennheiser and the American director Roxanne Benjamin was made to get under your skin: The director used just a smartphone and recorded most of the audio with Sennheiser’s AMBEO SMART HEADSET to capture the scary atmosphere of every scene as realistically as possible. The headset, which was developed with A/D conversion specialist Apogee, makes 3D audio recordings possible: microphones in each of the earpieces record true-to-nature ambient sounds which can be played back by any stereo headphones. As the sound around the film’s protagonist played by Phoebe Tonkin is recorded in 3D, the viewer is completely immersed in the movie’s soundscape: A passenger rustles his newspaper in the front of the bus the protagonist is on, a couple argues to her right while behind her, she senses someone watching her.

Even though director Roxanne Benjamin made FINAL STOP without any dialog, she creates an astonishingly realistic and thrilling cinematic atmosphere with the use of the AMBEO SMART HEADSET: Because of the three-dimensional sound, horror and shocking moments appear more intense than ever before. “Since we structured the short around the use of 3D audio, I kept the camera largely behind Phoebe, so that audiences really felt that fear of being followed. This was the element that struck me the most about the AMBEO SMART HEADSET when I was first testing it out – just how effective it could be in enhancing a narrative horror setting. The 3D element really brings you a whole lot closer to the action and feeling like you’re right there with Phoebe as she’s experiencing this fear. It’d be fascinating to see it being used for a full thriller or horror feature," said Roxanne Benjamin. Uwe Cremering, Director AMBEO Immersive Audio at Sennheiser, added: “We wanted to let viewers experience the remarkable emotional quality 3D audio can lend to any film and with FINAL STOP, Roxanne tapped the full potential of the AMBEO SMART HEADSET in providing a frighteningly lifelike audio experience.”

A bus ride to nowhere
FINAL STOP creates the perfect setting to experience the 3D soundscape of a movie to full effect: The protagonist played by Phoebe Tonkin is on her way home from the city on a night bus. Soon she notices a man in the back of the bus whose face is covered by a hood. The more people get off the bus, the closer he gets to her. Fearfully, she finally gets off the bus in an abandoned part of the city where she hopes to shake off her pursuer. But as soon as she leaves the bus she realizes she did not get off alone.

At home in the genre
FINAL STOP director Roxanne Benjamin is rooted in the thriller and horror genre. As a producer, screenwriter and director, Benjamin has broken new ground and established her own understanding of horror with episodic films such as Southbound, XX and the V/H/S series. She is currently in post on the survival thriller Body at Brighton Rock, which she wrote and directed. Leading actress Phoebe Tonkin also has genre experience: In 2012 she appeared in the horror movie Bait 3D and joined the cast of The Vampire Diaries. The young Australian became known to a broad audience through her role in the series H2O: Just Add Water, in which she played one of the main characters, Cleo.

Founded in 1945, Sennheiser is celebrating its 75th anniversary this year. Shaping the future of audio and creating unique sound experiences for customers – this aim unites Sennheiser employees and partners worldwide. The independent family company, which is managed in the third generation by Dr. Andreas Sennheiser and Daniel Sennheiser, is today one of the world’s leading manufacturers of headphones, loudspeakers, microphones and wireless transmission systems. In 2018, the Sennheiser Group generated turnover totaling €710.7 million. www.sennheiser.com